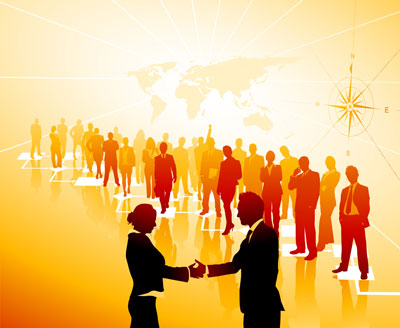 I’m sure you have heard of the handshake deal. Some are amazingly successful and long-lasting, but it’s rare that the initial handshake is not followed up with a contract that formalizes the initial meeting of the minds.

In a way the handshake is (or should be) a very Vested act, because it implies – if both parties are honest and well-meaning – a degree of trust, honesty and collaboration in the new relationship and for the future.

The relationship between McDonald’s and Coca-Cola is often cited as a classic example of two companies working effectively without a written contract. These companies succeed on the strength of their relationship, the soundness of their business decisions, and their commitment to work together. Coca-Cola counts McDonald’s as its largest customer thanks to a handshake deal dating to 1955. That relationship may be the exception that proves the rule, but my guess is that in the intervening years that handshake was formalized in some fashion.

After all, our society has become incredibly litigious since 1955—a crowd of baby boomers went to law school and had to find work!

I’m thinking about the handshake deal for two reasons. First, there’s an excellent article, “In Praise of the Handshake,” in the March Harvard Business Review by Dan Ariely, the James B. Duke Professor of Behavioral Economics at Duke University. He writes that “incomplete contracts” (for instance, the handshake) are fine between friends. But when it comes to vendors, partners, advisors, employees, or customers, he continues, most people and firms “believe that incomplete contracts are a reckless way to do business.” Then firms often go in the opposite direction, striving to fashion “complete contracts” that are “as airtight as possible.” That approach is also flawed because dependence on “absurdly detailed contracts in every situation comes with its own downside,” he says. For one thing they lack flexibility and can’t possibly address every real or imagined situation that may arise.

This brings me to the second reason I’m thinking about the handshake deal, because Ariely’s thoughts track similar points outlined in my new book, The Vested Outsourcing Manual, which will be published in June by Palgrave Macmillan. (I co-authored it with Jeanette Nyden, Jacqui Crawford and Katherine Kawamoto.)

A third approach, and one that Vested Outsourcing strongly advocates, is to craft a contract or agreement as a flexible, performance-oriented and collaborative framework designed to achieve mutually beneficial Desired Outcomes for all the parties involved. The Vested approach acknowledges that contracts are by their very nature incomplete works in progress.

The handshake is important but what happens afterward is even more important.

Following the Five Rules of Vested Outsourcing, especially Rule 5—creating a collaborative governance structure that provides insight and not merely oversight—will put a firm grounding on the deal after that initial firm handshake.